The G20 Agenda from an Urban Perspective: Views of Engagement Groups 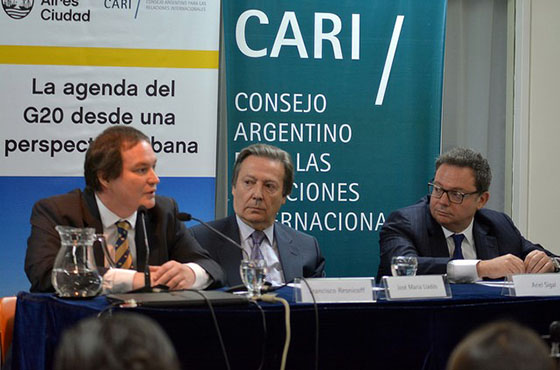 The Executive Director of CARI José María Lladós began the seminar, organized jointly with the City Government of Buenos Aires with the objective of analyzing the impact of urban issues on the G20 Agenda. He started by highlighting the present role and prevalence of this issue for international relations and the relevant roles played by cities. As evidence, he mentioned the existence of Departments of International Relations in many Argentine cities which has prompted CARI to create the Committee on Subnational Actors in International Affairs. Along with this, he noted the growing participation of civil society in activities related to the formation of public policy, reflected in the participation of CARI and CIPPEC in the co-organization of T20.

In continuation, Francisco Resnicoff, Undersecretary of International Relations and Institutions of the City Government of Buenos Aires, emphasized the urban dimension of the issues both of G20 and of the associated Engagement Groups, since the world is increasingly urbanized, leading to other problems in city centers. In this way, Resnicoff detailed the existence of a bidirectional relationship between the impact of what city leaders discuss and how cities influence the global agenda. He also added that cities have developed certain capacities to formulate public policies that often situate them on the vanguard and that affect an increasingly large amount of people.

Urban 20 (U20) later presented, which is a joint initiative with the city of Paris and driven by C40, that seeks to become a forum of dialogue between the largest cities in the world and bring this voice to G20 in order to debate urban problems with global impact.

The following speaker was Ariel Sigal, chief of the advisory cabinet of the Ministry of the Treasury, who argued that the Argentine presidency of G20 demonstrates the support of the international community and its confidence that Argentina can complete its duties. She specified the external context in which this occurred: a moment in which the agreements that govern the world have begun to disintegrate, thus making it more important to build consensus. A few days before the end of the Ministry Meeting, in which the Ministries of Economy and the Presidents of the Central Banks of the G20 countries met, she highlighted the success achieved both in logistics and the content discussed, underlining the advance of the Hamburg Rules, recognizing the value of international trade for job creation and the inclusion and necessity of dialogue to continue to strengthen trade.

In representation of the various Engagement Groups, the first to speak was Carolina Villanueva, the Content Director for Women 20 (W20), who stated that the primary mission of W20 is to influence the leaders of the G20 to increase the participation of women in their country´s economy and society, coming from not only a perspective of rights but also in relation to business, since better access to productive resources for women increases the development of countries. She later presented the four pillars of labor of W20: labor inclusion, digital inclusion, financial inclusion, and the inclusion of rural women. She articulated that no country in G20 or even the world has complete gender equality, thus it is essential to continue working to reduce the labor participation gap.

The following presenter was María Emilia Berazategui, Sherpa of Civil 20 (C20), who explained that the Affinity Group in which she participates meets with all civil society organizations in the world that seek to bring their voice to G20, working jointly on the development of proposals to present in various meetings. She enumerated eight core facets of labor: anticorruption; infrastructure of the international financial system; education; employment and inclusion; gender; environment, climate, and energy; global health; investment and infrastructure; from the local to the global.

Agustín Alejandro Batto Carol, Chair of the Youth 20 (Y20), later spoke, who expressed that young people have vision and should participate in decision-making processes, given that from their perspective young people have the capacity to be disruptive and innovative and create space for advances to progress more quickly. He mentioned that of the three main points of the proposed Argentine agenda for the G20, the one that most impacts young people is the ¨future of work¨, because of the problem of youth unemployment, the necessity of an education in the 21st century, and the impact of drug trafficking in large cities.

The second panel was opened by Agustina Briner, the Project Manager of Business 20 (B20), who mentioned the topics addressed by said Affinity Group that relate to the urban perspective: the implementation of infrastructure investment in every country, region, and city; the question of digital infrastructure to achieve greater connectivity; the involvement of the business sector in employment and education, which, from his perspective, has much to give. In continuation, he presented the forum of business leaders, which endeavors to disseminate information for the domestic business community and a federal vision of the agenda, carried out by the working groups to make policy recommendations to the G20.

The fifth presenter of the Groups of Affinity was Gabriel Lanfranchi, co-chair of the Task Force on Climate Action and Developmental Infrastructure of Think 20 (T20), who stated that following the seminar´s theme, the urban explosion has effects in terms of the production and construction of cities, in which most of the world´s wealth is generated, and also the greatest amount of greenhouse gases are emitted. In his Task, the theme that concerned them was climate change and how cities can mitigate its effects. He underlined that the three main points of the G20 (infrastructure, food security, and the future of work) are key to addressing the challenges of this century and that there is a development group that deals with subjects of habitats, by which urban issues are being driven from within the G20.

The last speaker was Gustavo Gándara, Policy Sherpa of the Labor 20 (L20), who presented on the foundational objective of this Engagement Group: trying to influence politicians to bring their working subject to the center stage of discussion. He detailed the proposed lines of work for this year: issues of learning quality and formation; labor formalization and decent work; strengthening of social protection steps. Lastly, he remarked that the Declaration of the G20 leaders does not necessarily constitute policy in every country, and that policy implementation depends on the everyone´s participation to ensure that the G20 results in efficient public policies for our countries.